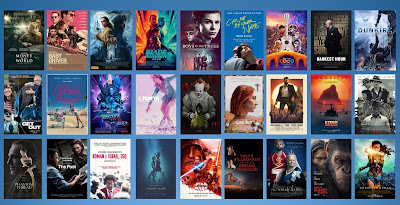 Nominations for the 2017 Cosmique Movie Awards are now officially open!

This is your chance to react with or against the Academy Awards. Unhappy that Wonder Woman was snubbed? Vote her in! This was a super competitive year at the Oscars and many favorites like Tom Hanks, Jessica Chastain, Holly Hunter, and Armie Hammer didn't get recognized. If you want, this is your chance to honor them.

Voting is done online and must be completed no later than Saturday, April 7, 2018 by midnight PDT. If you already submitted your ballot and now want to make changes, email us at ballots@cosmomovieawards.com before the April 7th deadline to let us know your change.

Here are some downloadable resources to help you as you vote:


The awards have been split into five ballots. Feel free to only nominate as many as you wish for each award (up to six). If you only have three favorites, you can leave the rest of the slots blank. Feel free to skip entire categories if you don't have anything.

Email ThisBlogThis!Share to TwitterShare to FacebookShare to Pinterest
Labels: 2017 Awards

We're excited to announce that nominations are almost open for the 2017 Cosmique Movie Awards!

Some voters complained that the schedule was too rushed. They didn't have a sense of what to see until the Oscar nominations were announced, and they didn't have a chance to see enough before the Academy Awards ceremony (much less a week before when we had to close our nominations). And some were even further inspired by watching clips at the Oscar ceremony itself, when it was too late.

Last year we experimented by giving voters more of a lag time so that they could catch up on more end-of-year great films that weren't available on DVD or streaming services before the Academy Awards. Unfortunately, the calendar got away from us and it wasn't until almost Autumn before we were done.

So this year, our calendar will follow the Oscars' schedule but with more of a lag time. Our nominations will open on the day of the Academy Awards ceremony, and voters will have a month to complete their nomination ballots.

Every year -- okay, some years -- we have some seasonal variations that reflect cinematic trends that might be more of a fad for that year. A few years ago, we added a one-off award for films set in San Francisco. Last year, we revived the Best Cameo Award that had been discontinued years ago.

This year, we're going to have three on-off awards. To make room for them, we've decided, perhaps controversially, to let the "Worst" awards lapse. In recent years, many voters have skipped over the Worst categories. With online trailers, Rotten Tomatoes ratings, and social media word-of-mouth, voters have more resources than ever to prescreen and only see the films they're likely to enjoy. So for now, at least, we're going to let those awards peter away.

In their place, here are three one-off awards for films released in 2017:

A note to voters

Remember, the Cosmique Movie Awards are a chance for you to make your opinion heard. Pissed that Wonder Woman got shut out of the Academy Awards? Honor her at the Cosmos. Oscar-bait films not your thing? We have awards catering to action/adventure, horror, sci-fi/fantasy, and other niche genres. Didn't see much in 2017? There's a lot available on streaming, but you can also focus on the Lifetime Achievements if you want to focus on old movies and classic film stars.

Need inspiration? Here are some downloadable to help you remember what you saw in 2017 and let you know what we think are "buzzworthy" for each award:

Nominations ballots will be posted on Sunday, March 4, 2018!