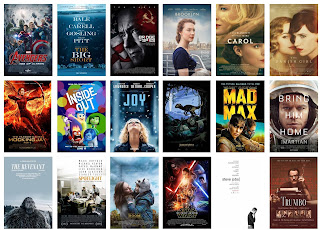 Upset about the Oscars? Unhappy that no people of color were nominated for acting awards? Mad that Carol wasn't recognized for Best Picture or Best Director? Annoyed that The Martian got nominated for comedic awards at the Golden Globes? The Cosmos are your opportunity to show who you think should have been nominated instead.

And we have plenty of awards for things they don't recognize, either. Awards for favorite heroes and villains, as well as for Action Adventure, Horror, Fantasy, Science Fiction, and Superhero films, among other genre awards. Sexy awards like Sexiest Ensemble, characters you most want to be intimate with, and best nudity -- gratuitous or otherwise. Plus dishonorable mentions for worst film, most overrated film, and worst performance.


If you wish, download one of our lists of eligible films to refresh your memory of what you've seen this year.


Long story, but the web form ballot is currently not working. We have ballots in MS Word and in plain text formats. Download either one, fill it out at your leisure, and email it to ballots@cosmomovieawards.com no later than midnight on Sunday, February 14, 2016.


If you've returned a ballot and want to make a change, just email us before Sunday, February 14 and explain the changes you would like to make.

Email ThisBlogThis!Share to TwitterShare to FacebookShare to Pinterest
Labels: 2015 Awards, 2015 Films, Other Awards 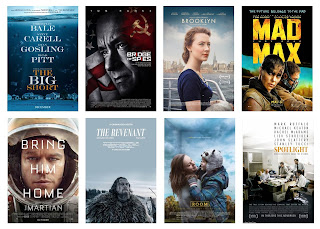 The Academy of Motion Picture Arts & Sciences has announced their nominees for the 88th Academy Awards, and The Revenant leads with 12 nominations, followed by Mad Max: Fury Road with 10 and The Martian with seven.

All three were nomination for Best Picture, along with The Big Short, Bridge of Spies, Brooklyn, Room, and Spotlight.

Both The Revenant and Mad Max score Best Director nominations for Alejandro G. Iñárritu and George Miller, respectively. The other Best Director nominees included Lenny Abrahamson for Room, Tom McCarthy for Spotlight, and Adam McKay for The Big Short.