Sir Christopher Lee passed away on Sunday, June 7, 2015 in a British hospital where he was being treated for respiratory problems and heart failure. He was 93.

He appeared in over 200 films as well as numerous television and video games, but will be best remembered for his frequent roles as a villain, including Count Dracula in numerous Hammer Horror films starting with Dracula (1958), Francisco Scaramanga in the James Bond film The Man With the Golden Gun (1974), Dr. Victor Gannon (opposite Bette Davis) in Return From Witch Mountain (1978), Saramun in the Lord of the Rings and Hobbit films, and Count Dooku in the Star Wars prequels. 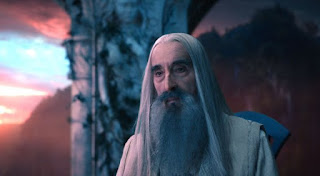 He also shares in Best Ensemble wins for The Two Towers and for The Lord of the Rings: The Return of the King (2003), as well as in additional Cosmo ensemble nominations for The Fellowship of the Ring and for The Hobbit: An Unexpected Journey (2012).

Lee had long studied the works of J. R. R. Tolkien, author of The Lord of the Rings, which he considered to be the greatest literary achievement of his lifetime, and was the only person involved in the films to have personally met Tolkien. Though he had coveted the role of Gandalf for decades, he was too old by the time Peter Jackson began to film the series, and the role went to Ian McKellen. The role of of Saruman did not require horseback riding or swordplay, though ironically in his career he’s believed to have filmed more sword-fighting scenes than any other actor in history.

I still think The Lord of the Rings is the greatest literary achievement in my lifetime. Like so many other people, I couldn’t wait for the second, and then the third book. Nothing like it had ever been written. Other authors like T. H. White and Lewis Carroll invented imaginary worlds, but Tolkien not only invented an imaginary world, he invented imaginary races, which you can easily believe in. And he created very long appendices with all the family trees and the names of the previous Kings and so-forth. It’s quite incredible, really, the scholarship and imagination that went into the writing of it. And what is even more remarkable is that Tolkien, who was a professor of philology, invented new languages.

Though his character Saruman did not appear in the book The Hobbit, Peter Jackson chose to include additional scenes with Saruman that were happening concurrently, as outlined in Tolkien’s appendices. Because Lee was then too old to weather the rigors of traveling to New Zealand, he filmed his scenes alone in London against a green screen.

All told, the 11 films in his Cosmo filmography* include:

* An actor’s Cosmo Filmography includes any film that has received one or more Cosmo nominations, even if it wasn't for the actor’s performance.