Meryl Streep song cut from "Into the Woods" 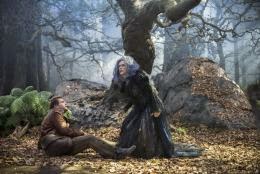 An original song written for Meryl Streep's character has been cut from the Hollywood adaption of Into the Woods, according to an interview with director Rob Marshall (Broadway World).

Marshall was quick to caution that the cut had nothing to do with Streep's performance. "I don't think people will be remotely ready to hear her sing this material," he told Entertainment Weekly. "The power from her is off the charts."

There's no word whether Streep's cut song may still make it's way into the film's closing credits, which would still make it eligible for a Best Original Song Oscar nomination. Many film adaptations of musicals add a new song, since Academy rules preclude songs previously released from being eligible for Best Original Song. Chicago skirted this by including a song that had been written for but ultimately cut from the Broadway productions. Other movie musicals that have scored Oscar nominations for new songs include "You Must Love Me" in the 1996 film Evita, and "Listen," "Love You I Do," and "Patience" in the 2006 film Dreamgirls and "Suddenly" in the 2012 film Les Miserables.
Posted by Kevin @ BGFH at 8:35 AM No comments: